Immediately following WWII, Europe and much of the rest of the world remained crippled by the effects of the war. Six years of unrelenting conflict had left countries near bankruptcy and reeling from wholesale destruction. It would take years for them to recover.

The United States, however, had emerged from the war altogether differently.

By the end of 1945, it was the most powerful nation in the world. Its military strength was beyond question, its industrial might was staggering to behold and, within a few years, its economy was booming to astounding proportions.

By the 1950s, that economy had created millions of new jobs and given young families the income to buy both homes in the suburbs and the cars they would need to get from those suburbs to their new jobs.

The conditions were perfect for the automotive industry. Detroit knew it and the competition between them to grab the attention, and the business, of the growing consumer base led to a flourishing of imagination from designers and engineers.

The concept cars they developed were were wild in design and filled with technological wizardry – cars created by a generation caught up in the excitement of a time when science fiction in the form of rockets, jet aircraft and atomic power was becoming fact.

It must have been a thrilling time to be a part of the automotive industry and here are just a few of the wonderful concepts that appeared during this time. 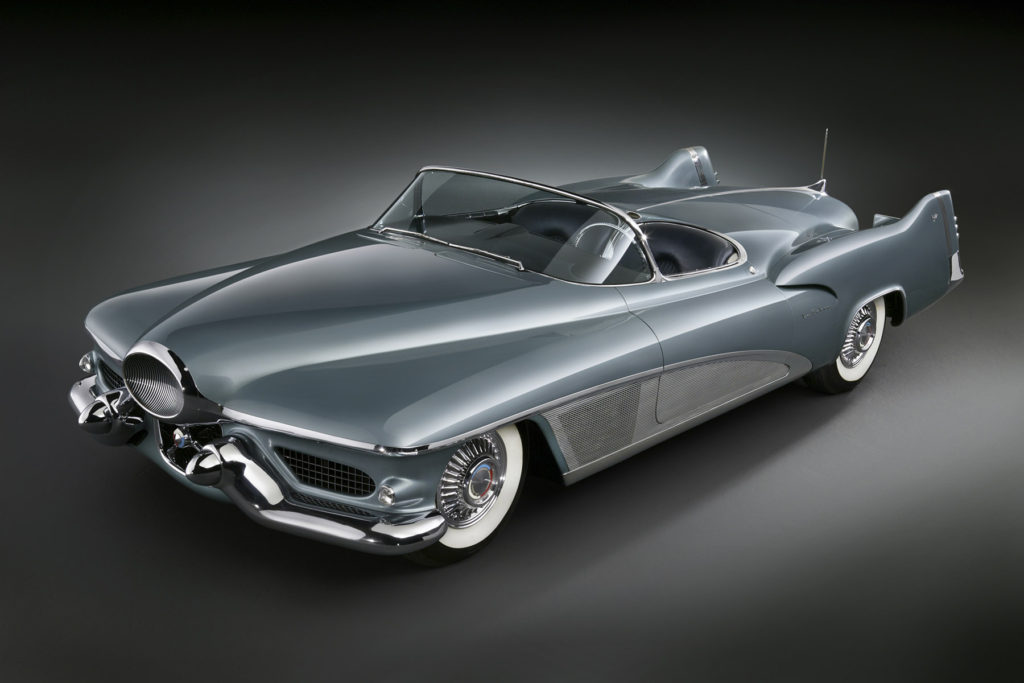 Attributed to General Motors’ design guru Harley Earl (creator of the first concept car, Buick’s 1938 Y-Job), the Le Sabre, with its air-intake styled nose, wrap-around windshield and tailfins, was obviously inspired by the new technological wonder of the age, the jet aircraft, and, in particular, the US Air Force fighter, the F86 Sabre.

Powered by a dual-fuel supercharged 215ci V8, it included such cutting edge technology as built-in hydraulic jacks and a power-operated convertible top with a moisture sensor that, when rain was detected, would automatically lift the top into position. The Le Sabre was a true showstopper wherever it appeared and Earl used it for a number of years as his personal ride. 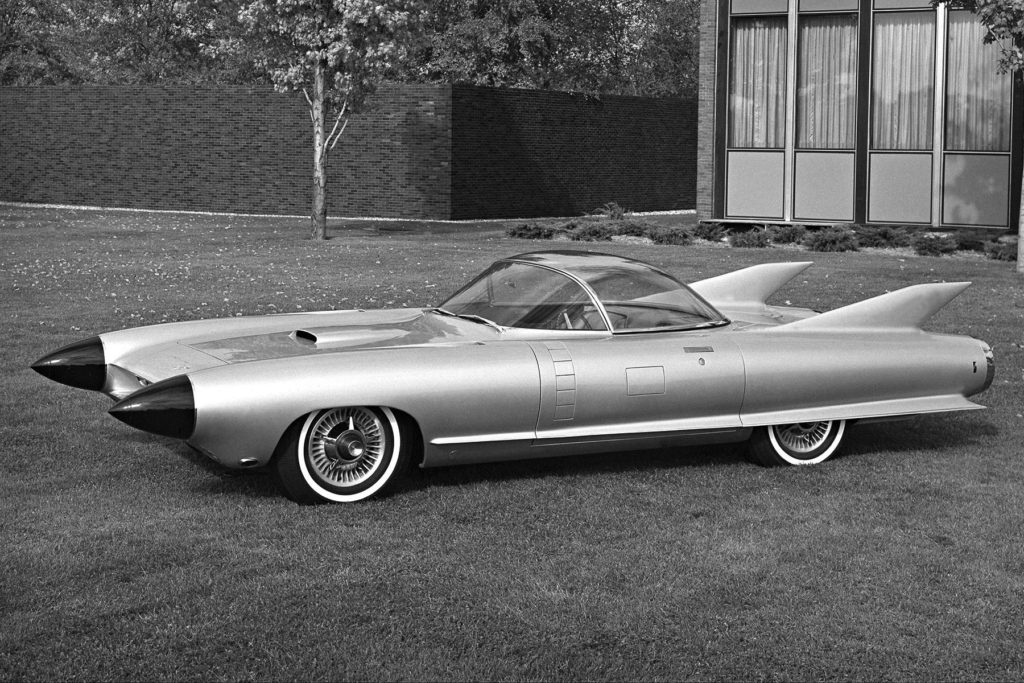 The influence of the jet age reached it peak with concepts such as the Cyclone and the Firebird III, which not only looked like grounded aircraft but featured technology more likely to be found at 30,000 feet. The Cyclone, for example, carried a form of radar in its front twin nose cones which, when it sensed obstacles, would warn the driver with an audible signal and a warning light. Add in sliding doors and a communication system that allowed occupants to talk with people outside the car without raising the bubble canopy, and you have a very advanced, and odd, car indeed. 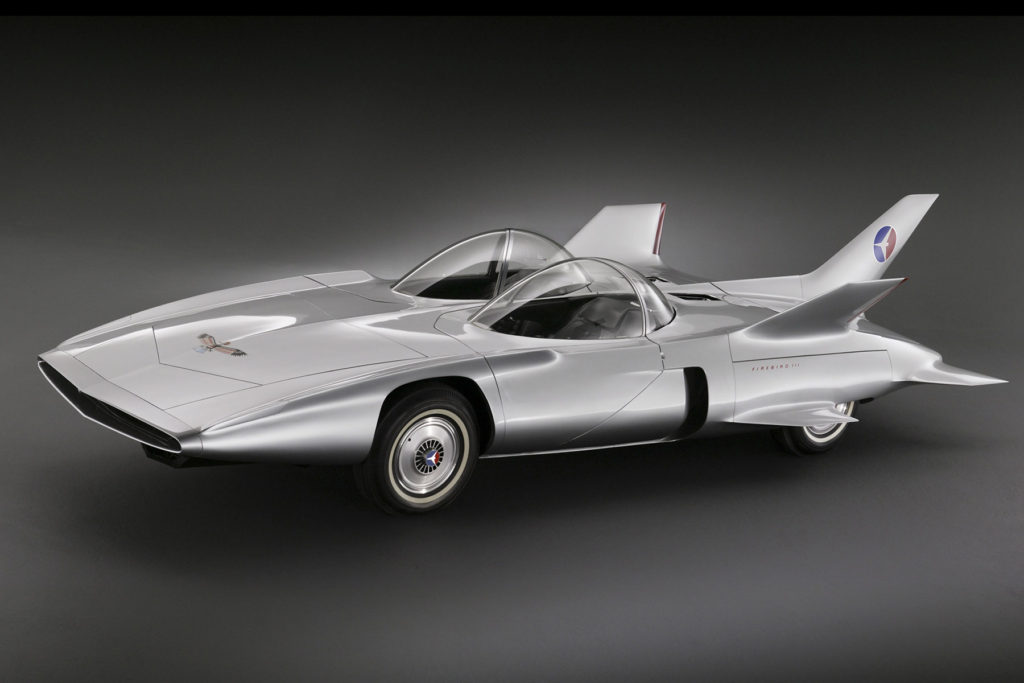 The third in a series of GM experimental cars, the Firebird III it had all manner of features packed under its fin-heavy exterior. These included a gas turbine engine, steering and acceleration control by a gearstick-like apparatus on the centre console rather than a steering wheel and pedal, and a function called ‘autoguide’ – an effort at autonomous control that worked through the use of coils under the front of the car which straddled a current-carrying wire embedded in the road. It even had air drag brakes and a ‘sonic key’ that signalled the doors to open. Amazingly, the whole package worked. 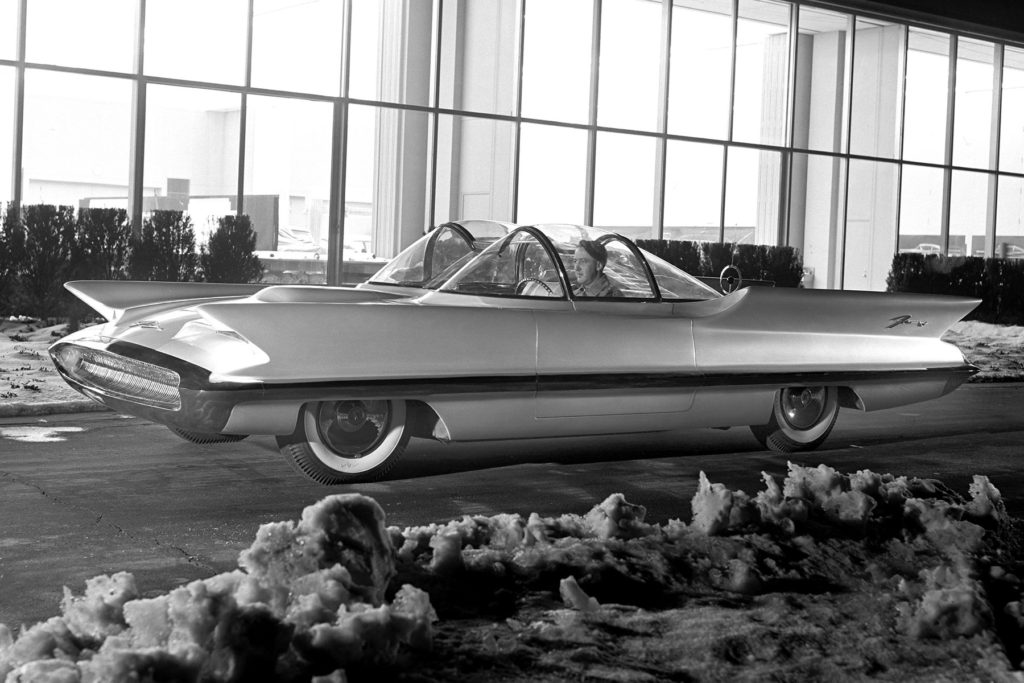 With a body sculpted by Italian firm Ghia and finished with a unique iridescent-effect paint job, the Lincoln Futura was always going to look the business. Built on the foundations of an experimental chassis and engine, the Futura had air-cooled brakes, air conditioning, a push-button transmission system and, hidden in the console between the seats, a telephone.

If the car looks familiar, it’s little wonder. Ten years after it was made it appeared on television in a rather different guise – painted black and with a tweaked body, it was the original batmobile. 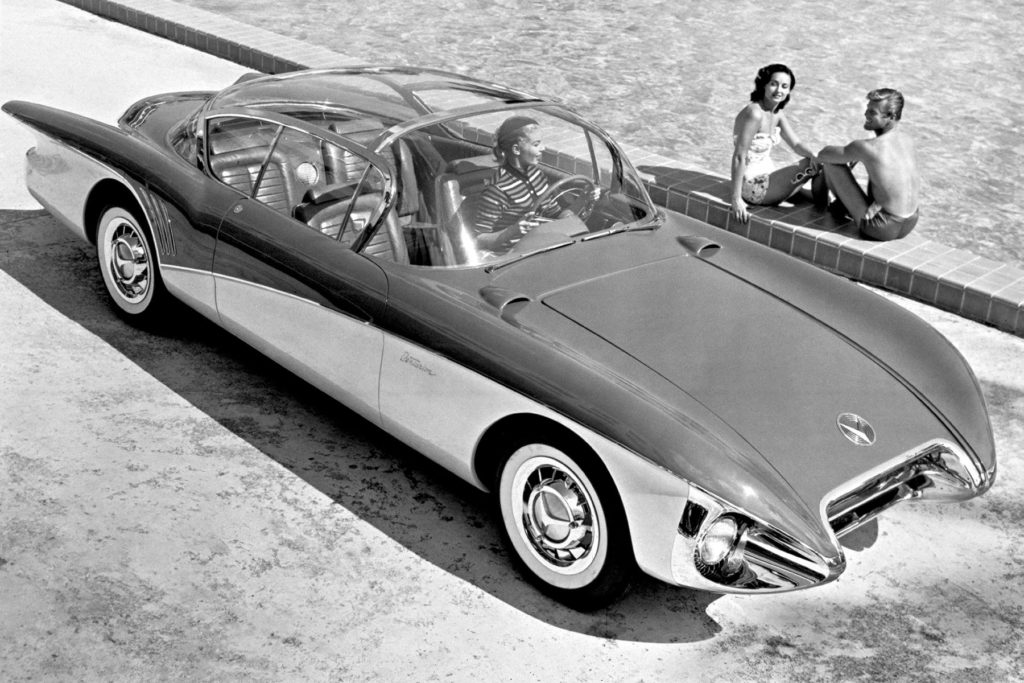 Another beauty clearly influenced by aircraft design, the Centurion had full glass bubble cabin, sweeping fins and spear-like front end. Inside, the aircraft theme got a good run too – it had a steering column that was located in the centre of the dash with the steering wheel swung over to the driver’s side on an arm.

Though that design never caught on, there were features that would become standard many years later. For example, located just above the centre steering column was a TV screen connected to a camera set in the rear of the car removing the need for a rear view mirror. Today, that’s a feature built in to just about every new car. 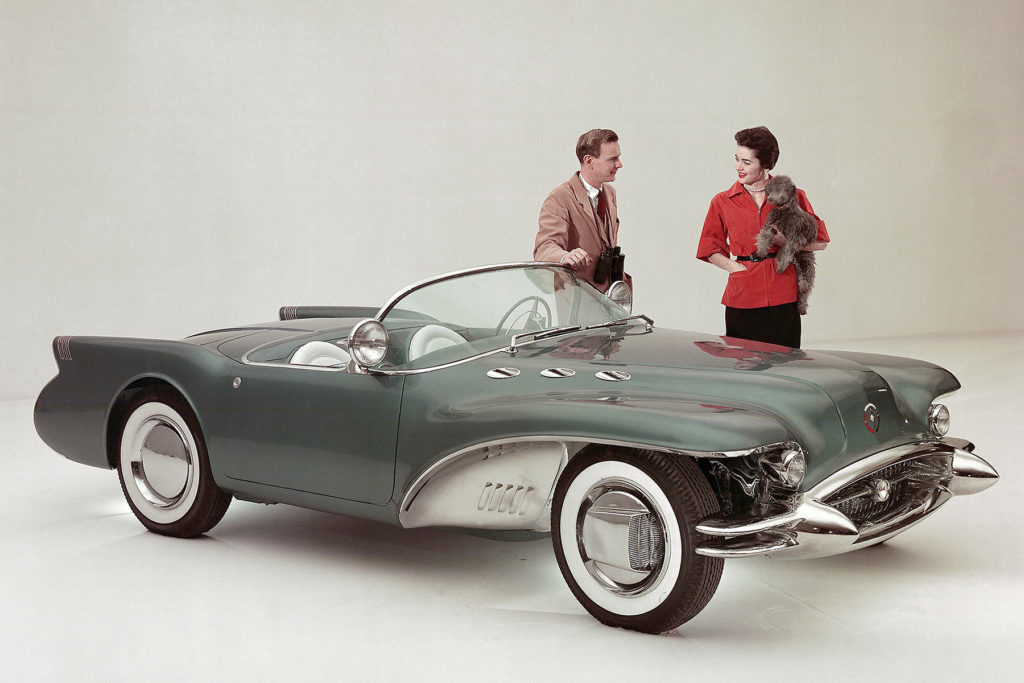 Built of fibreglass, the Buick Wildcat II concept was powered by a 322ci V8 pumping out 220hp. It’s unique front-end styling exposed the underside of the fender in rather brilliant fashion and integrated the popular ‘Dagmar’ bumper guards – the two artillery shell-like protrusions on the front bumper that were named after a buxom TV actress of the early ‘50s.

Headlights were, unusually, mounted alongside the windscreen. It also featured, in its original configuration, ‘Roto-Static’ hubcaps with scooped wheel covers that remained stationary as the wheels turned, providing a fresh flow of air to the front brakes. Some of these features were later replaced but even with those changes the Wildcat II was a beautiful-looking two-seat sports car. The fact it never went into production is a crying shame. 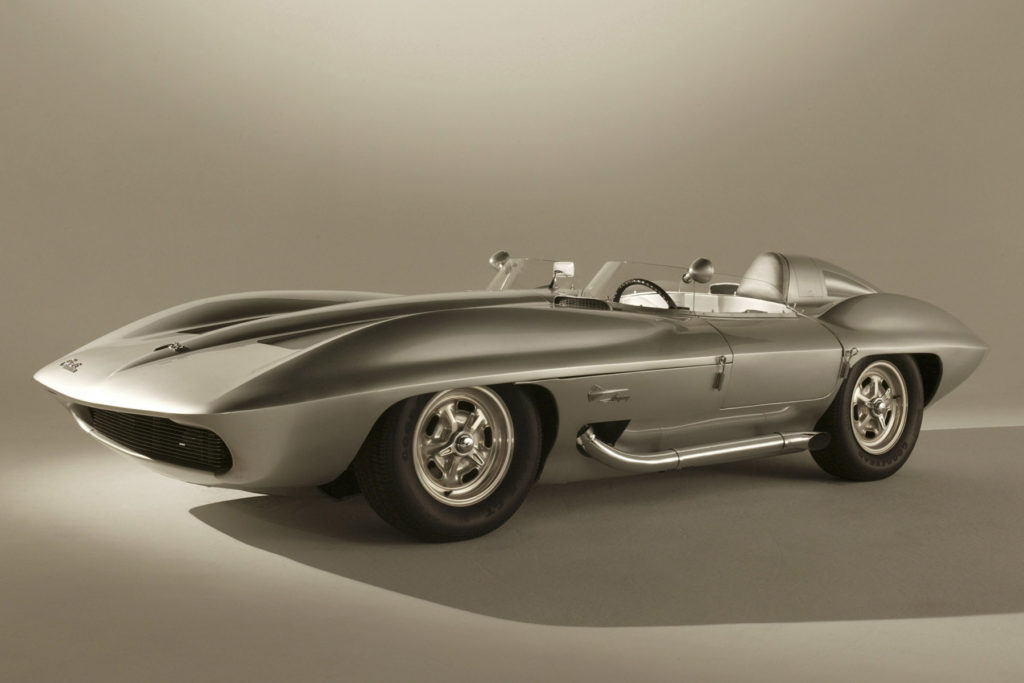 With an eye on beating the best racecars currently pouring out of Europe, GM allowed its design chief Bill Mitchell to build this stunning piece of kit – a sleek fiberglass-bodied roadster that was fitted with a high-compression, fuel injected 283ci V8 engine producing 315hp.

Mitchell ran the car for a couple of successful seasons before detuning it, adding a full windshield and passenger seat and exhibiting it as a show car.

The Stingray Racer proved to be quite influential in the appearance of subsequent road-going Corvette models and it is clear that the second generation Corvette, launched in 1963, borrowed heavily from this design. 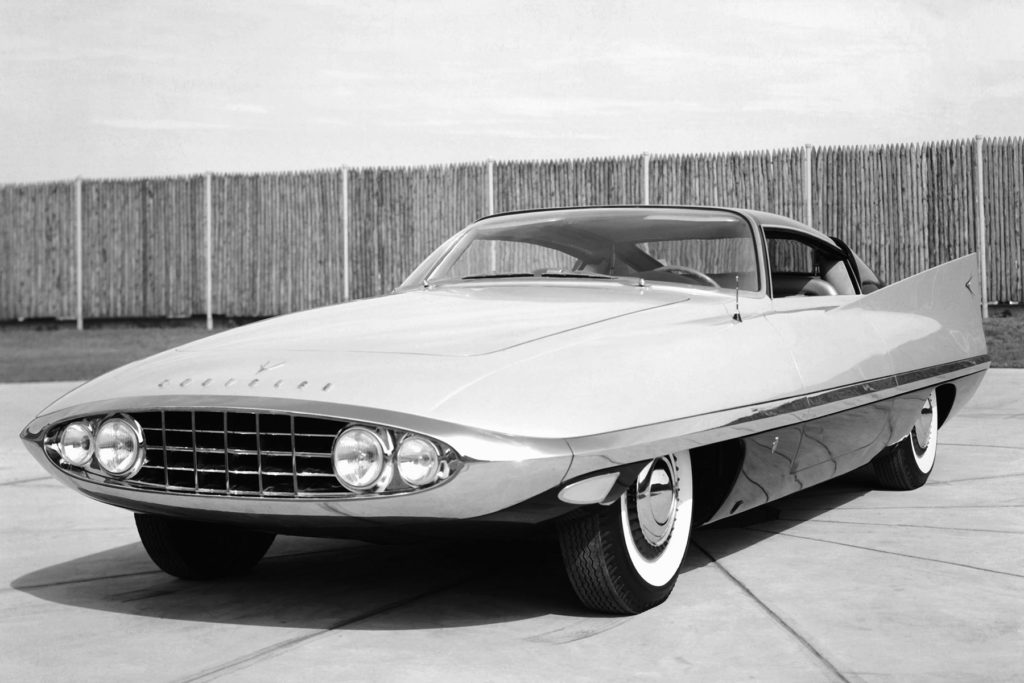 A concept that really does look a decade or two ahead of its time, the Dart Diablo was conceived and designed by Chrysler stalwart Virgil Exner and it was a big beauty of a thing.

Incorporating steel and aluminium in its construction, the Dart was powered by a 375hp Hemi 392ci V8 and was built upon the chassis of a 1956 Chrysler 300.

An immensely long car at 6.5m, it was fitted with power steering, power brakes, power windows, a power top, power antenna and an innovative electrically-powered retractable steel hardtop roof that could be operated while the car was moving.

A soft-top version of this car, with slightly altered fins, was developed in 1957 and received a bid of $US1.4 million at auction in 2013. 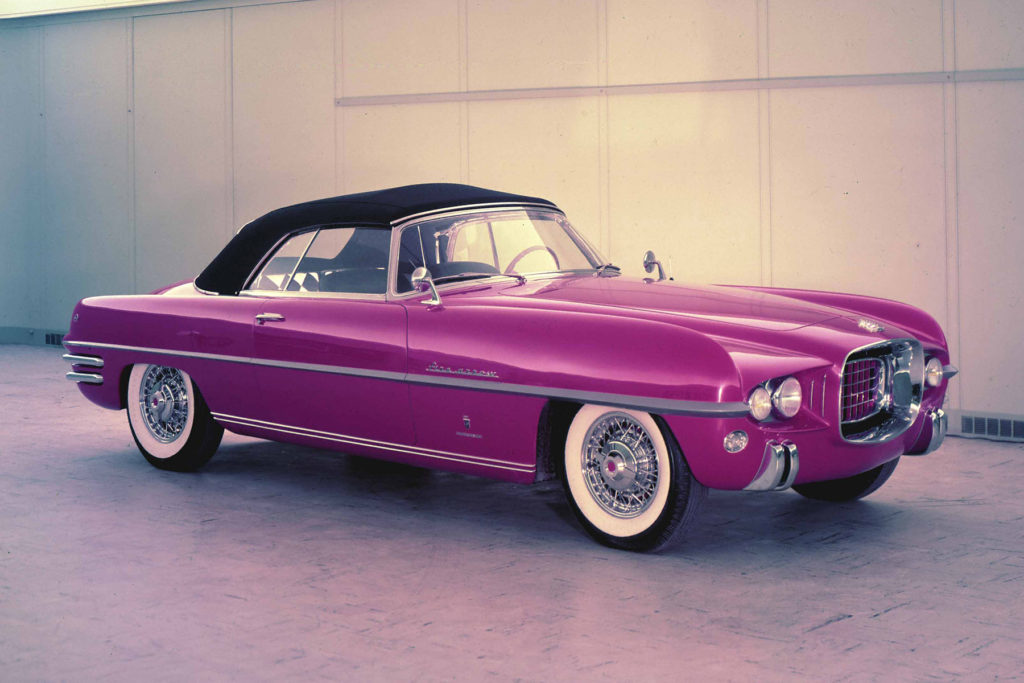 The Dodge Firearrow concept series was a group of early ‘50s concept designed by Chrysler design guru Virgil Exner and built by Ghia of Italy. The Firearrow IV was the last of the series – a beautiful convertible that featured rather daring harlequin-patterned leather upholstery, was powered by a Hemi 270ci V8 and was, by most accounts, prepped and ready to go into production.

Aesthetically as pleasing as anything on the road in the US or Europe at the time, the fact that Dodge decided not to go into production is a terrible shame. It is little wonder the Firearrow IV is one of the most sought after cars of its generation and commands a pretty hefty price tag – it sold for $US1.1million in 2007.