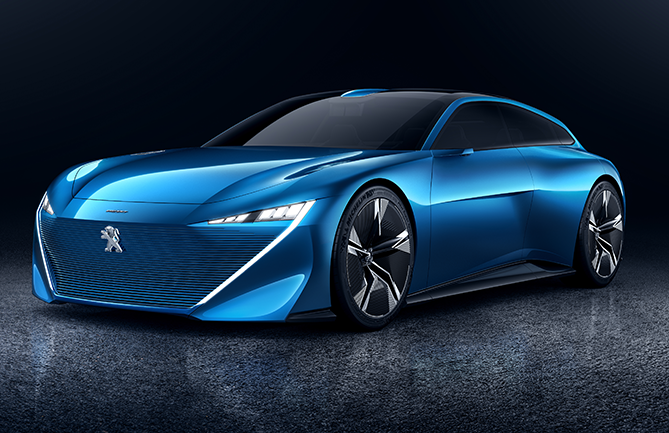 The French are at it again. Renault gave us the jaw-dropping Trezor last year; this year, Peugeot gives us the Instinct - a glimpse, the company says, into ‘the future of mobility’.

The glorious Shooting Brake concept looks fantastic but, as with many a concept car these days, it’s the technology that is stuffed inside that is supposed to turn our heads.

The Instinct is powered by a PHEV powertrain offering 300 bhp and features both ‘Drive’ and ‘Autonomous’ modes. On board technology includes an ‘Internet of Things’ (IoT) platform, the Samsung Artik Cloud, which syncs with the user’s devices. This enables the car to learn its user’s lifestyle and preconfigure its settings – for example, driving mode, seat and interface settings, ambient lighting and audio can all be adapted seamlessly to the user’s routines.

This intelligent technology means the Peugeot Instinct can adapt to match certain behaviours. For example, it can read data from a smartwatch and configure its settings to ‘Autonomous Soft’ mode to give the driver a relaxing ride home. Or, through the synchronisation of the driver’s diary and the vehicle navigation system, the driver is prompted to set off for an appointment 15 minutes earlier, to allow for the traffic and weather conditions at that time of day.

The Responsive i-Cockpit reacts when switching between ‘Drive’ and ‘Autonomous’ modes to create the most suitable environment according to how the car is being used. When in ‘Autonomous’ mode, steering wheel and toggle switch panel fold into the dashboard and the accelerator pedal folds back into the pedal unit to maximise space.

The Instinct showcases optimal levels of seating adjustment too. The seat base, seat back and headrest are all treated individually, allowing the occupant to select the position most suited to them. Passengers can also all communicate with the vehicle via a chatbot, a speech-driven personal assistant offering a vast array of services, including booking cinema tickets or buying online.

However, for all the genius stuff going on, it is still, for most of us anyway, the design of a car that makes our eyes widen and mouth curl into a smile. And the Instinct certainly does that. The French are pretty good at this.